We finished the permaculture design course! (over a week ago… when I started this update). It went great. We got to spend a lot of time around people who were very enthusiastic about what we were learning, and made a whole group of life-long friends. The class culminated with group projects where we got to observe a piece of land and design our own landscape plans for said land. We’re wicked happy that we took the course, and now we’re certified permaculture designers! We’re excited to obtain and design our own space someday down the road, and this is gonna be a giant help to us in that process. And, we’re equally excited to continue to learn, practice & teach others about permaculture. 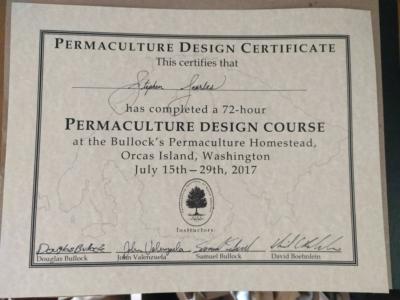 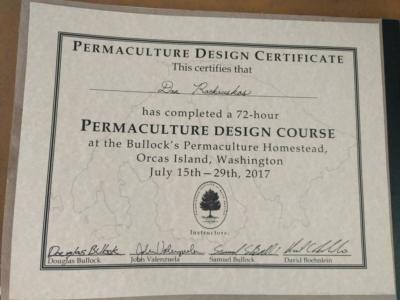 The course had pretty long days, typically starting with breakfast at 7 am and going until 9-9:30 pm and sometimes later. We’ve continued to work and learn in the week since the course ended, but the work days have been much shorter . We’re camped out on a farm here, and it’s beautiful land to get to spend time on. We’ve been preparing meals in the outdoor kitchen, eating by the campfire, and swimming in the pond in the mornings & evenings before/after whatever the day’s work has been.

Rampant wildfires in British Columbia have cast a constant silver haze over the island for the last 5 or 6 days, but before that we were treated to some beautiful clear night skies. One night during the course, there was rumor that we’d be able to see the northern lights. Stephen and I took the camera and tripod out to a clearing on the farm to try taking some long-exposure night photos, to which I am a total newb. No such luck as far as seeing the northern lights, but it was fun to practice the sky pictures. Here’s one pic from that night: 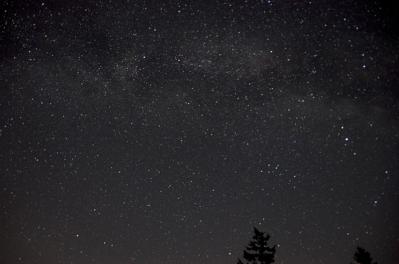 Here’s hoping it clears up a little for some good full moon pics tonight!