Woops! We’re on Day 9 (woops again, now it’s actually day 11!) of our trip and I’m well overdue for my first update. Always good to set the bar low right from the get go.

Our trip started July 1, technically, but I’d be remiss if I didn’t at least mention the day of Thursday June 29th. We went out to the American River to go white water rafting with 8 of our friends. It sounded like a nice leisurely time cruising down a river, getting some sun, laughing with friends, and having a little adventure… but it only kinda sorta worked out that way. Long story short - my raft (Stephen and I were on separate rafts) ended up tipping over and spilling 6 of us into the most intense rapids of the course, where a few of us thought we were gonna drown, and sustained mostly minor injuries. Later, somebody’s oar smashed into my right thumb, and it was pointing completely sideways. Gross! I almost puked in the river at the sight of it. Luckily it was just dislocated, not broken, or that would’ve been a serious damper on our summer plans. I guess drowning would’ve been a serious damper too, now that I think of it.

Anyhow, my dislocated thumb left Stephen to do most of the driving the first week of our trip, but didn’t really interfere beyond that. Consider that my first and last white water rafting trip.

So, on to the actual road trip! We spent the first 4 days of July at Stephen’s family’s cabin in Arnold, CA, with his family. What a great way to kick off our trip. We barely left the cabin and spent our time relaxing and hanging out with his family, eating their delicious food (thanks Melissa and Mike!), playing card games and drinking the occasional cocktail. 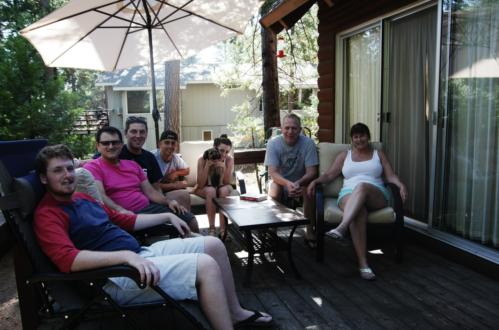 After a hectic end to our time in Oakland, getting some relaxing family time in was the perfect way to re-charge. The cabin is in a remote mountain town, it’s very quiet with forest-fresh air.

Here’s a picture I took of a hummingbird peeing: 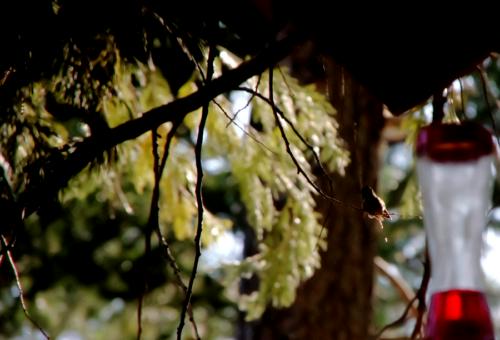 We left the cabin on July 5 for Tahoe, which neither of us had been to. There is still snow on the mountains out there, which is crazy to see when you’re driving through 100 degree weather in July. Overall, driving around the northwest has offered just about non-stop breathtaking views, it hasn’t gotten old yet.

Tahoe was our first time camping in a summer that promises to be filled with it. Here’s Stephen cooking our first meal over the fire: 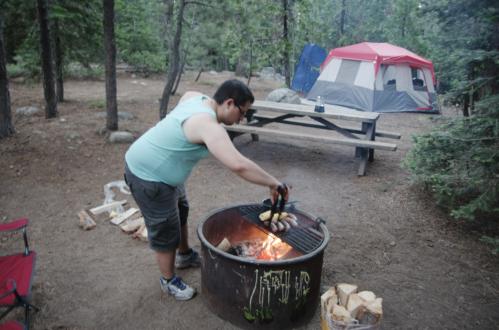 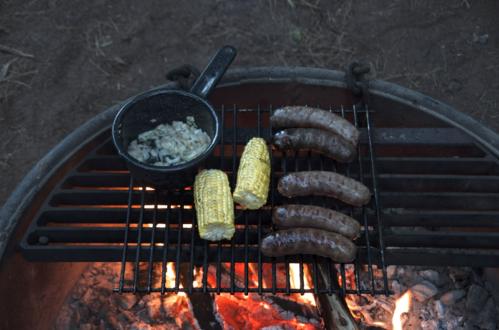 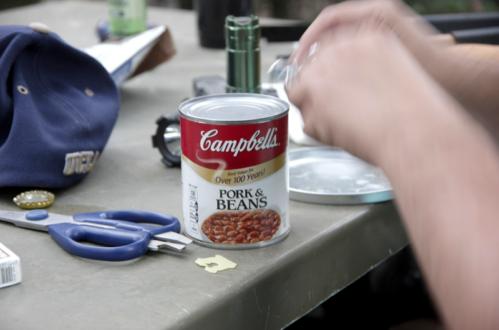 Tahoe overall was beautiful, although we focused more on the camping aspect than we did on the lake aspect. We tried to take a boat ride once, but the timing didn’t really work out. We ate a hot dog by the water instead.

Now we’re in Orick, CA, camping out at Gold Bluff Beach. It’s one of the most gorgeous campgrounds I’ve ever been to - right on the ocean, but you have to drive deep through a forest to get there. Pictures to come - I’ll do a follow-up photo gallery post soon!

There’s a lot I’m leaving out/glossing over, but time is tight and we gotta get back out and do some exploring. Tomorrow, we start out towards Glacier National Park, which has been high on my sight-seeing checklist for about a decade now. Then it’s off to Orcas Island to start our permaculture program. I’ll tryyyyy to post updates a little more often from here on out, I promise…