After Nashville, we drove down to New Orleans. Wow, what a beautiful city. We got there after dark; it was warm and and humid. Our airbnb was a couple blocks outside the french quarter. The trees, with gnarly trunks and crooked branches, lined the little residential streets and canopied over the streets in places. That night, hungry after arriving, we dipped into the French Quarter and walked to a 24-hour bar/restaurant, Buffa’s, (New Orleans has a bunch of those) and had maybe the best burgers from a restaurant on the whole trip. Walking through the Quarter at night is great, too. It’s quieter (mostly) and you can see the beautiful wrought-iron galleries (fancy balconies) lit by old fashioned gas lanterns.

The next morning, we wandered around the French Quarter, found some beignets in the market, got some ridiculous frozen beverages on Bourbon St., and just enjoyed the sights. 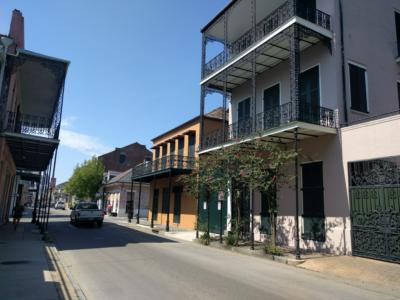 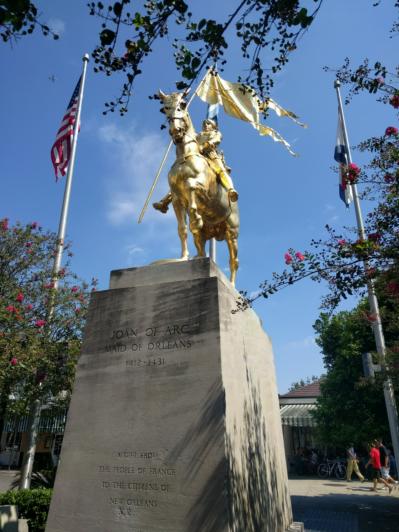 We wanted to see a little more of the city, so in the afternoon, we walked in another direction and made it to one of the biggest parks in the city, City Park. The neighborhoods we saw aren’t quite like the French Quarter, but they tend to have a uniquely New Orleans quality still. Some houses have beautiful wrought-iron on the porch, some have huge tropical plants, some have fleur-de-lis trim on onning support columns, but in any case, you’d be hard pressed to find any two the same. The park itself was sprawling greenery, with museums, lakes, streams, and plenty of people walking around. Later I had learned, while the French Quarter was mostly spared by Hurricane Katrina, that park was one of the hardest hit places and they were still working on recovery. Maybe that was why we couldn’t find a water fountain. In the evening, we went to a few bars and wandered around the nightlife a bit.

The next morning, we wanted to try to find Cafe DuMonde, one of the more famous places to eat. Turned out, though, they only do beignets, and we were craving a little more hearty of a breakfast. We found another little place in the french market that had a breakfast buffet and a live jazz band. Speaking of jazz bands, after eating, we walked to some areas we hadn’t been yet and found these guys:

Pretty incredible street performance. That afternoon we took a drive down to the Garden District, where, reportedly, are some of the fancier larger houses with huge gardens. We saw those and wandered down that area’s main drag, Magazine St. We found the place with “the best red beans and rice” in the city. I’d prefer to try them all before backing this one place’s claim, but they were soooo good, served with bread and some incredible grilled sausage.

Our second evening, we took a haunted tour of the French Quarter. 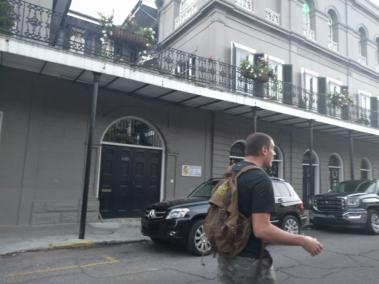 It was fun and even more informative than I expected. You know, the ghost stories are fun, but hearing some of the darker stories tied into the history of the city gives some memorable color to the more factual context. After the tour, we barhopped a bit more and went back to Buffa’s.

Our last morning, before we left, we went to get croissant sandwiches for breakfast and a muffaletta for eating on our drive up to Virginia. It’s like an italian meat and cheese sandwhich with a lucious olive salad used as a spread, and they’re made on like foot-diameter rounds of bread. We shared one, each eating a quarter at a couple stops on our drive.