We have slowly inched our way eastward! Yesterday, we crossed the Mississippi River and then made it into the Central time zone. We left the farm in Boulder Saturday afternoon went back to Denver for a day to hang out with my cousin Mikey and his fiancee, Brittney. We scared the crap out of their dog! Woops. He eventually grew to like us (just in time for us to leave). We also went to a Rockies vs. Diamondbacks baseball game. Coors Field has $4 tickets (and $3 Coors until the game starts). After the game we went to Charlie Brown’s., the piano bar across the street from where Mikey and Britt live, where I consumed a slidah and a couple cape coddahs guy. Fun night!

Sunday we we left Denver and started heading towards Chicago. We encountered some car trouble that was pretty much our own fault. We mistakenly thought we could use 85 octane gas in our car, which was really cheap in Colorado. Apparently, lower octane gas doesn’t do well when you go to a lower elevation (and we had just filled up before descending from the mountains). As soon as we hit Nebraska, the car started struggling. We stopped in a town called North Platte where we eventually pieced together what was going wrong, went to the auto parts store, and

—- I wrote two more paragraphs or so for this blog entry but I guess only this much of it got published, and the rest is now gone. Fudge. I’ll go back in and finish it later today (Tuesday), but rest assured we made it to Chicago! I leave you with this picture of Stephen with a rainbow on his head. 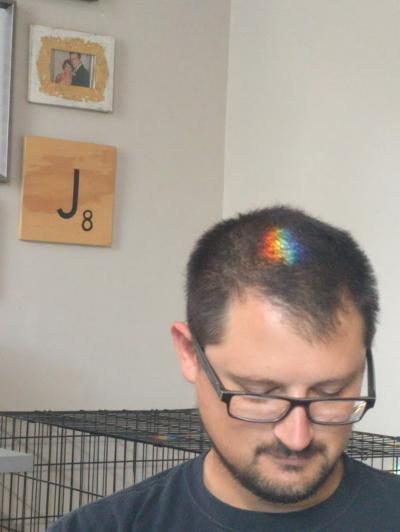