So after we left Curley Creek, we knew we wanted to head toward the totality zone of the eclipse. Our original plan was to head to Yellowstone—which would have actually been Grand Teton to be in the right position—but we had two obstacles. First, we didn’t have the solar filter glasses yet. Second, we realized the big national parks would probably be super crowded and we needed a place to stay the night.

So dealing with the eclipse glasses: we tried several stores recommended by NASA’s website, but they were all sold out. People were selling them on craigslist. We saw some posts for as high as $20, but we found somebody selling them for $5 in Casper, WY. We were just about near Helena, MT at that point, so it was about a 7 hour drive. We went for it. The sellers were set up in this JC Penny parking lot. We checked the eclipse map again at that point and realized that Casper is directly on the line of totality. It made sense now why the sellers were set up here. In fact, there were people setting up for a big eclipse party, with overpriced beer and everything. We bought the glasses and moved on to find a better place to stay.

We figured we’d stay around Casper, since it would get totality for a decent amount of time, even a little better than we had planned for. Just south of the city of Casper is Casper Mountain, which has some nice regional parks. The first little loop of campgrounds we tried, we lucked out and found an open spot—the last open spot on that loop. Once we set up camp, we headed back down into town to get some groceries and check out the festivitie There was a huge street fair with vendors of all kinds of art, t-shirts, food, beer, … but we mostly just wandered around. We did buy a solar filter for our camera. We went back to our campsite at that point, had some dinner, and went to bed pretty quick. No campfires allowed, due to fire risk, and we wanted to get an early start anyway.

The morning of the eclipse, we woke up and packed up the tent pretty quick. We drove along and found a spot along the road that seemed good, with only a few people there as early as us.

It was difficult to tell exactly when the eclipse was beginning. Once I was sure I was seeing some moon coverage, I started trying to take some pictures. The first attempt was cool, but very grainy:

There’s quite a bit of shots along those lines. Neat lens flare, but not great shots with the grain. Here’s some better ones: 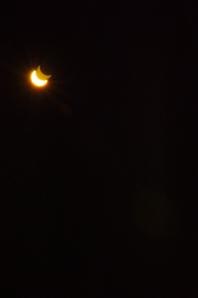 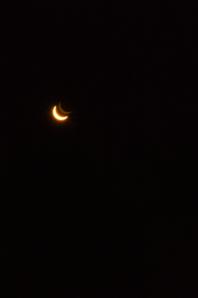 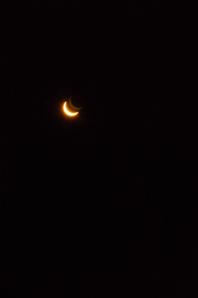 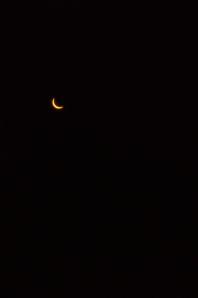 Getting close… the time from the beginning of the eclipse to totality was about an hour and a half, so we had some time to take some variations of the leadup. Once it got really close, the temperature started dropping. People around us grabbed sweatshirts. 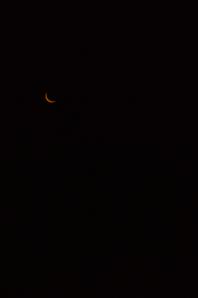 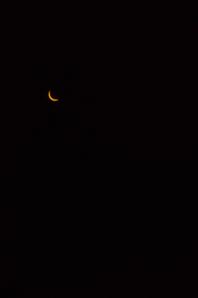 And bam! The eclipse itself was unreal, but it ended so fast. The skies were a dark, hazy blue. The light gave everything an eerie color. We didn’t experiment too much with taking pictures here, because we really just wanted to watch. But here’s a couple of the tries: 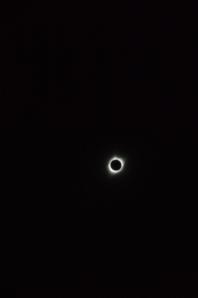 And then it was gone…

Once the light started coming back, we saw a herd of horses, running back toward their nighttime shelter, suddenly stop, circle around before some started back the way they came. People had told us animals act weird because of the strange interruption to their day/night cycle.

Once the totality had ended, we figured we’d try to beat some of the traffic, and hit the road toward Yellowstone.