Long time no write! The rest of our time at Curley Creek was great but this is gonna be a loooooong entry so I’m gonna sum it up a bit briefly. We did a good amount of harvesting on Thursday and Friday for the farmer’s market on Friday afternoon in Troy, MT. Unfortunately it was drastically under-attended as far as shoppers go, which was too bad because the market itself was really nice! The 3 of us woofers (the other woofer is named Peter) weren’t really needed for the entirety of the market so we took the dogs out for a hike in the Troy hills. Saturday morning I played some basketball with Pete & Peter, we had one last awesome breakfast, and took a goodbye photo with all of us:

We finished up our week at Curley Creek late Saturday afternoon on the 19th, sad to say goodbye to new friends but excited for a week of travel. We did a ton of driving. We first set out for Missoula to purchase eclipse glasses, to no avail. Everyone was sold out! We did some searching on craigslist and for some reason one of the results that came up was in Casper, Wyoming, even though it was about 9 hours of driving time away from where we were. We had nothing else to do and a couple free days, so we decided to drive through the night to buy glasses off some very nice people in a JC Penney parking lot Sunday morning. It turned out Casper was in the heart of the eclipse totality, so we lucked out and found a campsite and hung out until the eclipse on Monday.

We left Casper after the eclipse and started a three-day drive through various national parks and forests. The scenic drive through Yellowstone felt like something out of a storybook. We camped just outside of the actual park and drove through/around a good chunk of it between Monday evening and Tuesday during the day. We stopped to check out some of the geysers and hot springs and continued on through Grand Teton National Park, which is connected to Yellowstone. We stopped there to have a lunch picnic and take a picture, then continued driving south through the park. We were gonna try to find a roadside motel somewhere along out route to Arches National Park, but Stephen actually found an apartment on airbnb that was both cheaper and nicer than any of the motels! We took some (looooong overdue) showers, and then I gave us both haircuts & we shaved off our beards that had been growing all roadtrip long. Say goodbye to THESE: 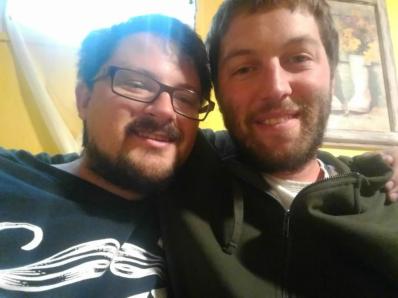 They’re already growing back in, and I probably won’t end up shaving again on this trip.

We had a bit of a leisurely morning on Wednesday then got an oil change, so it was a little after 2 by the time we hit the road. We misunderestimated the drive time to Arches and got there 20 minutes after the road through it closed for the night! Woops. We also didn’t make it to the Four Corners state border which was on my checklist, so we’ll just have to do another cross-country drive sometime soon to check out the stuff we miss this time around.

We drove away from Arches for a few hours then found a campsite somewhere in Colorado to sleep. It was close to 2 am so we didn’t even bother setting up the tent as we were exhausted and it was cold & windy. When we woke up Thursday around 7 we decided we didn’t like the campsite enough to actually stay there, so we moved on to Pine Cove campground in Frisco, CO in the Rocky Mountains. It was a quaint little campsite right by a reservoir. We hung out there Thursday and Friday, happy to relax and be stationary for a couple of days. According to the Google Overlord, which tracks our every movement, we drove 2,020 miles from Saturday to Wednesday! That’s a shitload of driving, folks.

Friday during the day we checked out the adjacent town, Breckenridge, which was cute in a very touristy way. We took a free gondola ride up a mountain, which was great, but then everything at the top cost way too much money so we rode the gondola straight back down after about 5 minutes. We headed back down to the campsite for lunch (beer brats with peppers & onions). We did some reading and made some (also loooong overdue) phone calls to family, and then that evening we had bacon cheeseburgers and drank a couple beers and some whiskey. Yum!

Saturday Stephen cooked us a delicious campfire breakfast, per usual. His cooking is quite consistently ridiculously good, even with the difficulties that can go along with campfire cooking. Next, we made the short drive over to Denver and met up with some of my old Boston friends who live there, Danielle (Dink) and Mike (Shep), and their dog Clark! Dink & Shep very kindly let us stay with them on short notice. I stupidly forgot to get a picture with them, doh! We got lunch together, hung out at their apartment a bit, then all went out to the park with their neighbor friend Dave and his dog. It was perfect summer evening weather, very comfortably warm, and we just sat out in the park drinking beers and whiskey again. We all had a nice time hanging out, and Stephen & I slept on Dink & Shep’s pull out queen-sized bed which was really comfortable! I woke up a little hungover this morning but it faded with some ice coffee, pot, and water. We left in the early afternoon to head to the next farm we’re woofing at in Boulder, but it turns out we have to wait until 6 pm to get there as the farm owners were out of town themselves and aren’t back just yet. We made sandwiches on the side of the road with some pork chops in our cooler that Stephen had cooked at the campfire on Friday, then headed to the local library to use the internet and update the blog.

And that brings us up to the moment! Enough of this long, potentially boring-ass entry. I’ll leave you with a few pictures - hover over the pics with your mouse for captions (Stephen tells me this feature may or may not work): 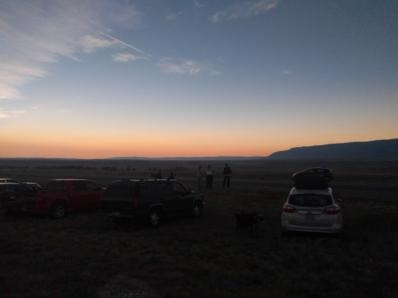 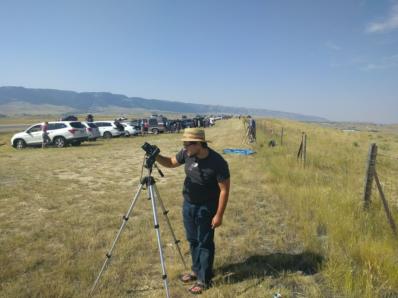 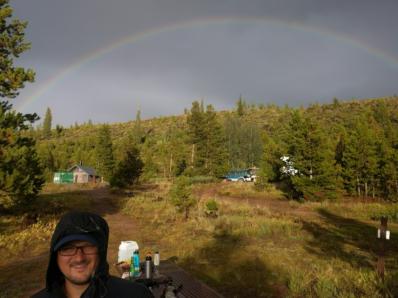 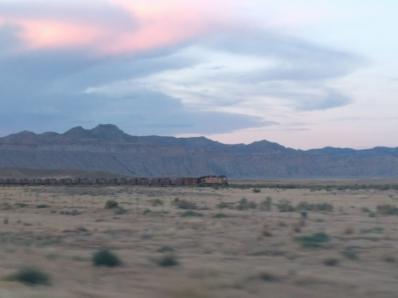 That’s all for now, off to the farm in Boulder for the week!